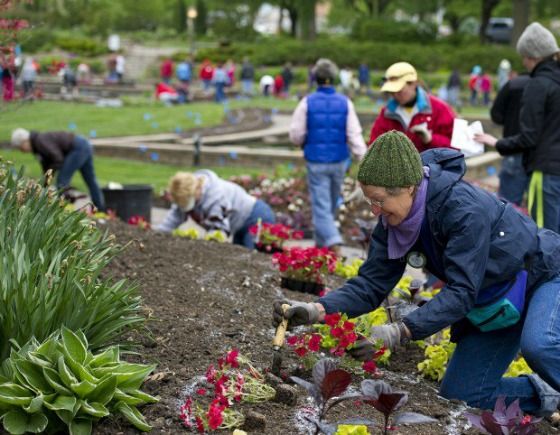 Built in 1930, the Sunken Gardens was a Depression-era project, built on a former abandoned neighborhood dumpsite. The 1.5 acres were originally donated by the Seacrests, the Faulkners and the Freys -- long time Lincoln families.

As a part of a city program helping unemployed men to earn money, E.M. Bair hired crew members to work on this garden. The men worked eight-hour shifts, two days a week for a total of $6.40 per week.

Lincoln's "Rock Garden" (as it was originally called) reflected the popular 1930's trend for rock gardens in progressive communities. Rocks were used for the garden's skeleton and for structures like water fountains and retaining walls at different heights to create terraced levels.

In 1931, the Gardens were in full bloom with 416 trees and shrubs. Final construction cost for the Sunken Gardens was $2,500.

The following 73 years saw many minor improvements to the Gardens and was even named as one of the "300 Best Gardens to Visit in the U.S. and Canada" in the National Geographic Guide to America's Public Gardens. It was the only Nebraska garden to be in this prestigious list, and the only concentrated public garden in Lincoln.

However, by 2003 the Gardens were showing their wear and were in dire need of a facelift. The Lincoln Parks Foundation proudly led a $1.7 million campaign that provided the first-ever major renovation and allowed for a partial endowment to be established. They led the campaign to "Polish the Gem" that we all know as Lincoln's Sunken Gardens. Impressively, the campaign met its goal in less than 12 months.

As part of the "Polishing the Gem" campaign, the Foundation created two successful programs: One Flower Forever and Paving the Path. These programs allow people to support the Sunken Gardens on an ongoing basis -- in honor of friends, loved ones and special events.

Renovation Completion
Major renovation work was completed in the summer of 2005. The two new sculptures were unveiled in early July and the Sunken Gardens Re-Dedication was held on the afternoon of August 21.

With the renovation came more wedding locations - in the pavilion overlooking the Gardens, in the white healing garden or above or below the waterfall, the Sunken Gardens holds a variety of perfect locations.  If you would like more information, call the Lincoln Parks and Recreation Department's main line at 402-441-7847 and ask for Reservations or visit the City's Website, keyword: wedding.

While the major renovation work has been completed, improvements are continually being planned.

Contributions can still be made to this project to continually improve the Gardens and to help fund the Sunken Gardens Endowment Fund for future maintenance. Gifts of any size are appreciated and all contributions are tax deductible as allowed by law.

What You Can Do